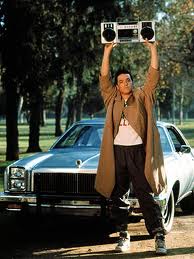 The radio is constantly on at work. In a lot of ways it is a sort of intelligent white noise that floats above all of the industrial noise in the kitchen. You wouldn't think so, but it is incredibly noisy in a commercial kitchen and I know I've lost a good deal of hearing over the years because of all my time spent there. The least painful part of the noise is the music/talk coming out of the beat up old boombox perched on a ledge in the back of the kitchen. Control of the radio and who picks what station is left up to whoever has the energy or the will to mess with the thing. This means the station choice is left mostly up to the first shifters who roll in at 5 a.m. They are almost to a person, country music fans. Now, generally I despise what passes these days for country music. I'm old school, Grand ole Opry when it comes to the country side of the musical spectrum. Give me Hank Williams, Patsy Cline, Jim Reeves with some bluegrass and cowboy music scattered in there for flavor and I'm okay. Modern country these days owes more to Allman Brothers, The Band and Bruce Springsteen than it does anything I'd consider the roots of country music. So when I come into work and B93 Thunder Country is cranking, my brain as learned to filter that shit out so much so that when people ask me what I think of this or that on the radio I can honestly say, I didn't hear it or I wasn't listening even though it's loud enough that it rides just above the general din. I also avoid listening to the country station because I hate the jingoistic patriotic cheer leading they feel compelled to indulge in at every opportunity. I mean , every day at noon they play the Star Spangled Banner. It reminds me of growing up and all the random military bases we lived on where the anthem was played three times a day.   This patriotic thing is in the same category as church going for me - I've done my share of participating in both, I'm done, now leave me the fuck alone.

It's rare that I, the chef, gets control of the radio. When the opportunity arises I still sometimes delegate the choice to someone else with the caveat, "No Country, Christian Rock, or Hip-Hop". I usually only take total control on my own when we have breaks and I'm in the huge kitchen alone or with just a few others. Next week is Spring Break, which means I'll be doing R & D by myself and that means I can indulge my kitchen music mojo. This means you can count on coming into the kitchen and hearing Alt-Rock, Be-Bop Jazz, Classical Symphonic, Punk, Electronica, Classic Rock, Opera, Folk, World and most anything else. Except for Contemporary Country, Christian Rock or Hip-Hop.

The other day, a rarity occurred and I was offered a shot at choosing a station. It was a fairly light day for everyone, a lot of the machinery was idle and quiet, so I picked NPR. It was Friday and I like to listen to Science Friday with Ira Flatow when I can. The rest of the kitchen krew expected me to pick something different. My eclectic audio tastes are well known which is part of the reason I don't get a shot at playing kitchen DJ very much. My pick was met with general approval and mild surprise. There are evidently a lot of NPR fans in my kitchen and it just hadn't occurred to anyone to listen to talk radio once in a while instead of Country Thunder. 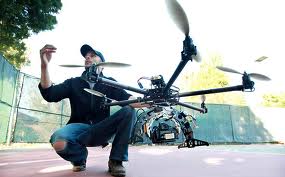 Ira did a segment on a phenomena that is in its infancy, but one that I feel will be as big a deal as smart phones in a few years. Domestic drones for civilian use. We got into our usual weird work conversations about the subject after the segment was over. Ira and his guest mentioned that probably the first use of drones in civilian air space would likely be courier drones in urban environments. Bike messengers will disappear and be replaced by small flying things zipping around a hundred feet above the streets. This was cool, but seemed implausible to us. When the guest suggested that one of the first uses would be pizza/food delivery we all perked up. You mean you could have a flying robot deliver pizza to your door? That would be friggin' awesome! I said, they'd have to electrify or armor them somehow to keep drunks from trying to climb on them. My shift leader, hearing this, said that they should design a heavy lift version capable of 300 + pound loads.

"Imagine. You get too shitfaced at the bar to drive so you grab a Designated Drone at the door, flash it with your GPS home tag from your phone, strap it on and it flies you home. Like the future version of the horse and buggy - just pass out and the horse walks you home."

One of the line cooks gets a wry look on his face.

"Yeah, imagine the skies filled with drunk bastards puking and peeing on you from above. it would suck to live in a bar's flight path, which with this system would be pretty much everywhere."

And then from there the conversation got really stupid. Still, it's an interesting subject. I don't think civilian drones are implausible at all. People once scoffed at the thought of everyone having a cell phone not all that long ago. This seems to be the same sort of thing. Years from now, when I arrive at your house to visit my old LJ friend in person using my leased Southwest Airlines Boeing Hybrid Electric Heavy Lift Strato-Drone pack, I'll be able to tell you I told you so to your face. 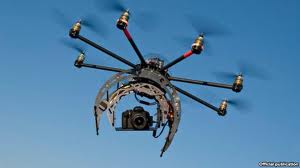